The world wars affected everything. The cosmetics industry was no different, and Cyclax could not avoid the damaging effects on trade. During the second world war, the many Cyclax employees were not only dealing with the devastating impact that wars were raging on their personal, home and family lives, it also affected their working lives as the Cyclax Company was dealing with problems too.

As the war became costly, the British government placed high taxation on non-essential items, which of course included cosmetics and skin care. Countries which had previously been traded to became off limits. Supplies of the ingredients Cyclax required to make their products became difficult to source and trade became more and more difficult.

Cyclax had a major factory in Tottenham Court Road, London, which was completely destroyed in the bombing. Cyclax adapted to this blow to the company, taking the production of their products to their family home in Berkshire before renting a factory in Leyton. This continued until 1953 when Cyclax were able to build a new factory in Essex. 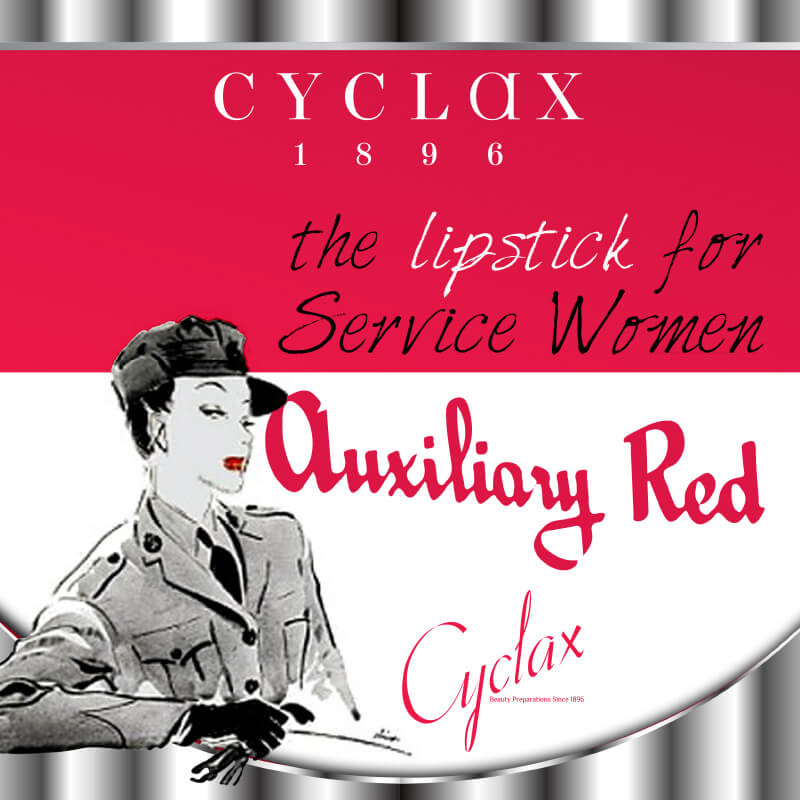 During 1939, Cyclax launched a new product for servicewomen. Small enough to fit into a pocket in their uniform, this lipstick was part of a kit given to the women serving our country. Cyclax was celebrated for this contribution to the war effort, as well as being responsible for the new trend towards this bold colour commonly worn during the war. The Cyclax company also created a burn lotion, sun proof cream, and camouflage for soldiers of the British Army.

The camouflage cream soon found itself to be useful post-war as a way for women to cover up any flaws on their legs, without the use of stockings. Women were encouraged through the Cylax’s advertising campaign to ‘add a touch of realism’ by using eyeliner to draw a seam along the back of their leg ‘from the ankle to the top.’

Cyclax was affected by the post-war austerity period which lasted until the 1950s. However, they built up their products again selling perfumes, deodorants, bath products, hair care, and skincare ranges. Cosmetics was affected for a more extended period of time as many people saw makeup as a luxury item. Cylax now also faced competition from American brands- a competitor which remains as Cyclax continues to create new products and relaunches in 2019.

Where can I buy Cyclax Products?